The roads through the Rockies were little more than vague paths. Prospectors who ran from one camp to another realized how the road had changed. They had complained about dirt roads humped in the middle, making travel lag and each footfall unbalanced, but in the bush, they had to fight every third or fourth step with brush too thick to walk through. They gained clarity like a bolt from God about the notion of bushwhacking. 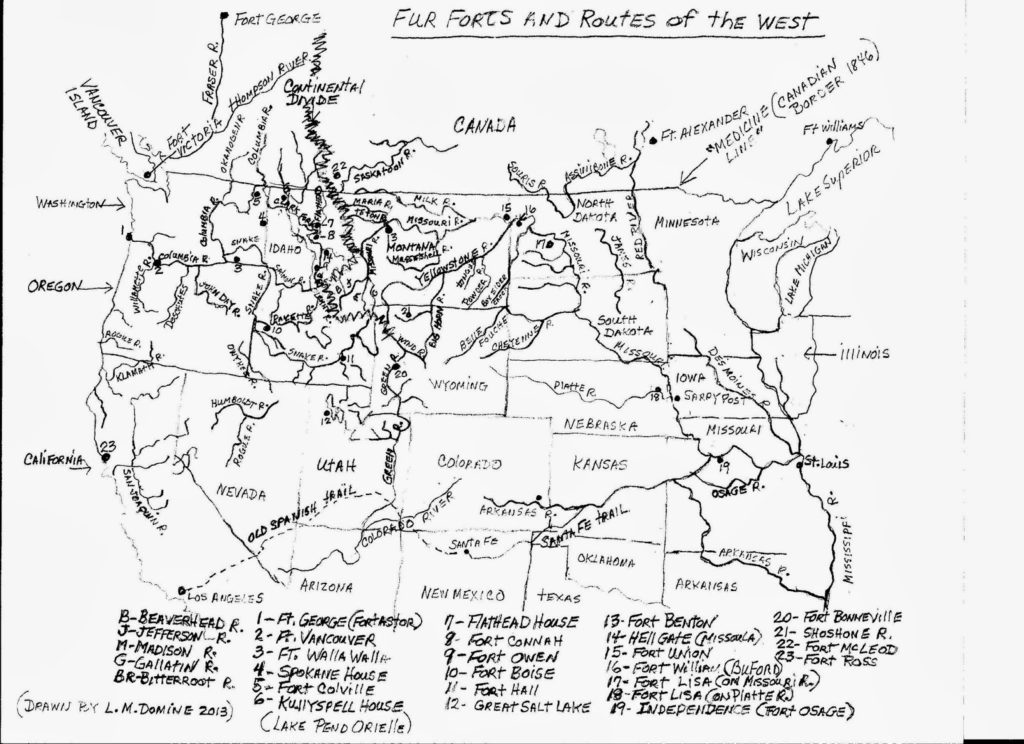 Fur Forts and Routes of the West – Courtesy of https://goo.gl/images/dxyd1g 1

Everywhere devil’s club hung low to the ground so that walking became a practice of lowered and raised heads. Prospectors‎ struggled to avoid satanic thorns and spiked plants clustered within the leaves of their neighbors. Fire thorns hid among innocent flowers, ready to rake a man’s hands and leave him in pain for two solid weeks.

Smart prospectors‎ mimicked the Indian guides in a game of monkey see, monkey do, swiveling their bodies left or right to avoid the thorns. Prospectors‎ ran with closed hands and fashioned whatever they could into gloves. They arrived in camp at night often with spikes and barbs needing to be pulled from elbows and thighs.

Thick forests covered in mossy carpets threw a man’s sight into imbalance with the constant dance of shadows thrown on every surface. Great trunks rose from the dank forest and hid the sun. In the gray of each morning, the men were reminded they must make the next camp before nightfall. Darkness was as a black glove that enveloped their faces and dulled all senses.

The Rockies were a magical place of worrisome awe where timber wolves trolled. Men shrank at the sight of their bull-like heads, and lank bodies that could weigh two hundred pounds. The packs numbered ten to twelve adults who could strike with the power and speed of brutes; their savagery often untold because what they tracked, they devoured.

The land seethed with hidden dangers from raging rivers to moss-covered quagmires. Prospectors would climb up a mountain side, cross the top seam, and then down in late afternoon. The mountains seemed endless, and the valleys between stretched like undiscovered continents.

Indian guides examined rock piles at the base of a cliff to judge solid foothold before climbing. They threw small rocks up the face to check the impact of rocks coming down. The Doig River, Blueberry River and Kaska Dena knew how to thrive in their savage land of impassable bush with no road to guide them but the memories of their fathers. The Cree and Dena-zaa conveyed white men across countless miles of shifting and rolling rock with not one road to follow.

Tags:bushwhackingfur forts and routes of the west