There are many methods that First Nation people used for making pemmican. The following is one description of how my Abenaki great grandmother, Celanire Vachon, would have made it in the late 1800s while living near the border of Maine in the Beauce Valley of Quebec. 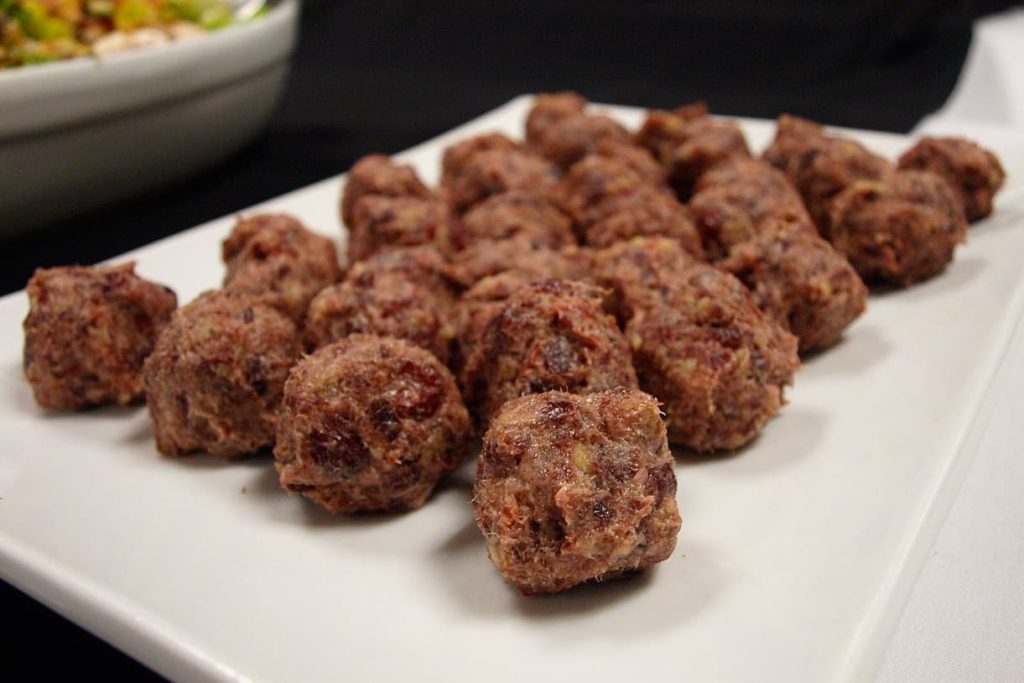 • Start with a beef shoulder, about 1.5 pounds and roast all night long in a constant, very low oven.
• In a flat pan, spread out your fruit, cranberries, blueberries or whatever berries you have. Mix with a little honey. Roast on a very low temperature for an hour to completely dry. Here you are trying to remove all moisture which would encourage mold and bacteria growth.
• Remove the roasted shoulder which should be golden and very crispy by now. By hand or knife, shred the shoulder meat until small pieces.
• With mortar and pestle, crush the meat until flour-like.
• Again with mortar and pestle, crush the fruit until fine bits.
• Pan fry half a pound of diced fat (this does not have to be beef fat) until no longer bubbling. Remove and strain over a clean cloth to separate the clear liquid fat. Discard the unclear fat.
• Mix the meat and fruit together, adding just enough clear, liquid fat to saturate the mixture. DO NOT OVER-SATURATE WITH FAT.
• Allow mixture to air dry for a few hours. You want the mixture to re-solidify.
• Your mixture is now pemmican. Measure out one teaspoon of pemmican and roll into a ball.
• Repeat for the remainder of your pemmican.
• Store the rolled pemmican in waxed butcher wrap in a cool, dry place.

As the fur trade grew and the Hudson Bay Colony flourished, opening up one trading post after another in the great Canadian wilderness, many would have perished if not for pemmican. This staple with its brother, bannock, sustained many a stranded traveler. There are a surprising number of ways for making pemmican among First Nation peoples. Each band clings stubbornly to their own method, which attests to the rich diversity found in native aboriginal cultures.