The prospectors‎ walked, slipping over mossy cover. Lazy black slugs thicker than a hog-eye slithered across leaves, dropping sperm in their shadows. On the underside of a felled tree, Nazaire spotted it, one small stock, gray with new fuzz pushing up toward the cover of sky, with fluffy rivulets carved into its cap like worms that struggled to break free. He stopped to pick it up and held it in his hand.

A FIELD OF MUSHROOMS

“What ya got there?” one prospector‎ asked.

Nazaire ignored him, walked a few more feet, then gasped. Across an open field, he laid eyes on the plumpest, full-grown mushrooms he’d ever seen. They were everywhere, in different varieties. Some had sturdy stems that carried ginger crowns slanted into cornucopia on one side like a tipped hat on a grand madame.

He bent to pick a few and threw them in a small bag at his waist. Raoul followed suit. The camp cook would be happy to add these to the stew tonight. He picked delicate sponge morels clustered together in bunches with hollow crevasses and elongated heads. Further on, one prospector brushed against a large red one, and a puff of smoke shot up. He ran behind the man and yelled, “It’s poison, that mushroom you kicked is poison. Lift your head and raise your arms high.”

The man coughed and ran parallel to Nazaire with glazed eyes. When the prospectors‎ stopped for a break, Nazaire splashed water on the man’s face. He took him aside and broke a few branches. He brushed the spores off that dotted the man’s pants and boots.

“Those mushrooms, bright red on top with white spots, don’t touch them. They explode with fine smoke that sticks to your clothes. Clean the spots off, and your hands touch the poison, then when you eat, you bring the poison to your mouth.” 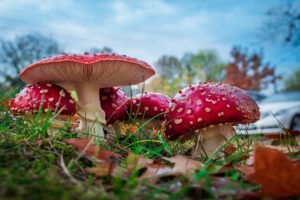 The Blueberry guide listened to the conversation with interest.

“How you know?” The Blueberry guide asked.

“An old man back home told me. He worked at Lake Nipigon where they grew. If you walk near them, walk slow and cover your mouth. Once the mushrooms open in the air, don’t breathe their smoke.”

He gave a subtle nod of thanks.

Joyce Derenas is a historical fiction author who writes stories based on the real lives of her French-Canadian ancestors of the Beauce Valley in Quebec.