Where did my research take me?

Next was a little side trip to Mayne Island, off Vancouver, B.C. as the guest of another second cousin.

Then off to Whitehorse in the Yukon to research at the Yukon Archives. I was at their door before they opened and stayed until they closed the lights at night. Well there really wasn’t any “night” in June and July – it’s as bright out at 2 in the middle of the night as it is at high noon.

While in town, I took in many of the sites, including the outstanding McBride Museum and the offices of the Whitehorse Star, a world-famous and historic newspaper. I stepped into the Yukon Tourism Center in Whitehorse with questions about local fauna and flora.

In Dawson, I almost slept at the Klondike Library of Dawson inside the beautiful Dawson Museum, and spoke with many Hån from the Heritage Department of the First Nations People of Dawson.

I rode in a boat with a Hån elder to Moosehide Village and walked among the “spirit houses,” looking for the grave of Romeo Poulin’s wife , Mary Smith Poulin. In town, Ed Jones, a staple in Dawson for decades rode me up to the YOOP (Yukon Order of Pioneer) Cemetery where I searched for Romeo Poulin’s grave and his son’s, Arthur. We found one remaining white picket fence surrounding one grave, that of Romeo’s first wife, Anna Marie Pasteels Poulin with an inscription blistered from decades of sun and wind damage. As the late afternoon sun crossed the sky, Ed ran back home and returned with a can of shaving lotion. He lathered the blistered cross, and don’t you know? The inscription revealed itself.

I visited the Dawson Tourist Center for answers to questions day after day, and discovered a living relative, a grandson of Romeo and Mary Poulin living in Carcross.  I visited the Dawson Daily Newsroom. My trip to the far North was very successful. I had arrived with knowledge of five brothers and two wives for one of them, and left with evidence of 22 relatives who came into the Yukon and stayed.

Then there was a trip to the National Archives of Canada in Ottawa where I discovered the ByWard Market and the famous patisserie shop, Le Moulin de Provence.

In Quebec, I met the infamous Marcel Cliché, noted genealogist, prestigious author and Historic Researcher at the Musée Marius-Barbeau and to the generous Mr. Daniel Carrier, Art Historian of the Société du Patrimoine des Beaucerons, both heritage collections in the birth village of my mother at St-Joseph of Beauce. A few villages away, I met Stephan Vachon, Vice-President and General Manager at Chemin de Fer Sartigan at Vallée-Jonction, Quebec who gave me a tour of the restored rail station and shared many stories. 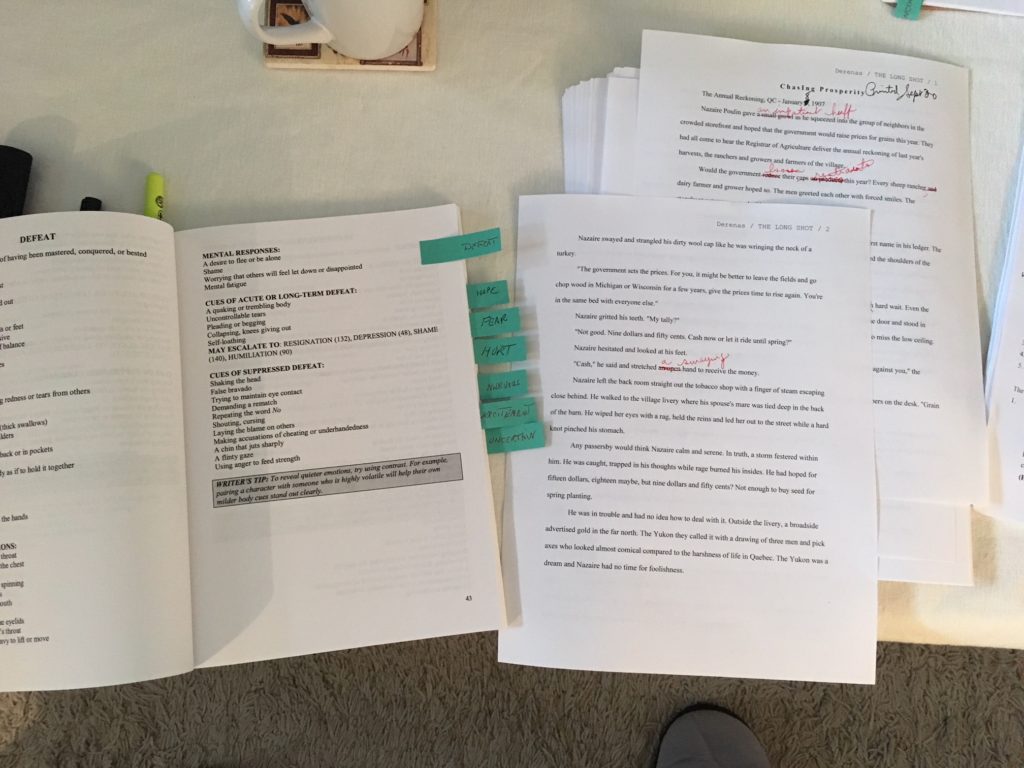 Here I am marking up my The Emotional Thesaurus with all the emotions my characters need to show the readers.

Tags:Route taken in the novel the long shot