Nazaire thought of the Cree who stopped in camp last night. The Camp Boss had asked how the men would go forward with word of a large pack of wolves nearabouts.

“Dene know where wolf is and where he attack,” the Cree said.

“I send word,” the Cree said, “Cree push them up. Dene make cut line. Men be good if’n they run.”

The Cree pointed an index finger in the air and made little stabbing motions downward. “Must run Indian way,” he said.

The conversation between the two turned into a lecture as men tightened a circle nearer the Camp Boss, all severe interested. Now Nazaire and Raoul listened harder and tried to capture the sense of it.

The Camp Boss turned to the runners. With an audience gathered, he had to say something.

“There’s wolves about. They’s usually not a problem, but we’ll send out more protection with you this time,” the Camp Boss said.

“What is this Cree talking about men falling?” one runner asked.

“In a wolf chase, if the front man falls, the wolves know more could fall, so they always go for the front man. You need your best runner out front. Look, you’ll be just fine.”

RUN FOR YOUR LIFE

The next morning, as the runners prepared to leave, the Camp Boss stood with outstretched hands. “Men, today you’ll see Dene on your left side. Don’t stop running. Stay in Indian file. They know what they’re doing so don’t pay you no heed. They’re protecting you, and they’re real expert at it.”

Weary looks came over the runners’ faces as they started off, each man watching left throughout the day. No Dene appeared, but as the afternoon lengthened, the land pushed back on either side, creating a funnel that crushed the men into one narrow path with a rock wall to the right.

A distant growl, low and long hit the air as the front Cree guide turned and yelled, “stay Indian file.”

Nazaire’s shoulders curled while his chest struggled to hold onto what body heat he could. As he ran, his heels almost hit the arm swing of the man behind. The cold cut down Nazaire’s throat like sharp knives and spread to chill his shoulders and ribs. He barely noticed a large timber wolf running parallel to the right side of a stone rise. Far to the right, a second wolf appeared at a slow run. It snarled.

Two more wolves showed themselves behind trees, then more. Each approached the wall as it rose in height, revealing a high ledge cut along the top.

The wolves edged closer, angry muzzles shooting up from snow cover. Teeth pushed up with a gashing sound more like gears crushing metal. Tails created a cascade of broken snow, a shower of diamonds showing their last whereabouts. The beasts jumped in one graceful motion onto the rock ledge that climbed higher above the ground.

One Dene guide appeared behind a tree to the left, then a second. Six more Dene walked out from trees ahead. They each moved in one swift motion with long rifles pointed at their targets, their barrels trained on the wolves.

Nazaire looked ahead and watched the Dene line up their shots. Like a circus pinwheel game, the Dene poised their barrels against tree trunks and aimed at the space between the men, firing. Aim and precision, the gifts of each Dene, found their mark.

The runners panicked, some slowed. One runner ran abreast of another man, blocking out any chance that a Dene could take a shot.

Crack the rifles fired. Crack, crack, crack. The hiss of a bullet gave a push of air across Nazaire’s chest. On the upper ledge, one wolf fell and tumbled onto a runner, Its urine showered the man as it fell.

Explosions rang down the stone wall while its echo climbed to the top of the ridge where the wolves slowed with a staccato-like dance after every bang. A spot of crimson bloomed on one wolf’s neck. Guns fired in a shattered assault of smoke and bullets.

Blood trails were everywhere as hit animals jumped in pain and backed away from the fight. Some returned for another try, their loyalty fierce to the pack. Howls and yips of injured wolves mixed in the air with the metallic, bitter taste of blood. Shrieks sounded out as the sharp smell of urine coated the ledge. 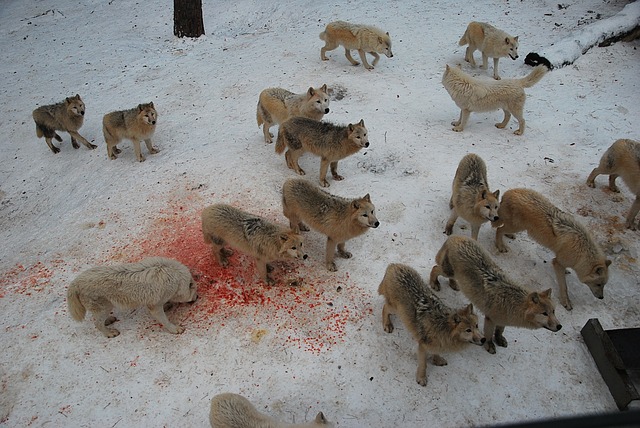 The runners were cold to the bone but couldn’t slow down. If they did, all would be lost in a treacherous turmoil of teeth and blood. Nazaire felt the grunts and yelps shake his shoulders. He was afraid, more afraid that he’d ever been.

Farther left, behind trees, more Dene moved in closer as they prepared to fire. Nazaire couldn’t believe his eyes. He ran but had to look back a second time. Next to one tree, a Dene male stood with feet apart. By his ankle, a young boy lay on the ground, his rifle firing through the line of men. The boys looked to be no older than ten.

Terror embraced the runners from the deep throated snarls of the beasts. Teeth gnashed and muzzles threw spittle from the ledge while the runners gasped below. The runners became horrified at the speed and power of the howling creatures.

Through smoke and loud reports, the wolves followed the ledge, its slow descent moving nearer level ground where it would join with their prey. Shots discharged one after another, their smoky trails vaporized to mist. One bullet whizzed in front of a man’s chest. Another shot missed a man’s leg. Reports fired all around and between the runners while the Dene whooped and yipped.

At the new camp, the runners stopped and stared into each other’s faces.

The new Camp Boss bellowed a welcome, “the guides did a real good job, I heard. Not a one of you scratched or lost.”

The runners cheered with upraised hands. Nazaire heard all but two wolves were cut down, making good the promise of safety as the last of the runners left the wolves’ gauntlet behind.

Fourteen Dene came into the new camp that night, eager for their thank you meal. Grateful smiles and continuous slaps on the back greeted them. The runners shuffled around on restless legs, their blood flooded with the adrenaline rush of their ordeal.

Nazaire said to one camp cook, “it looked like a circus shoot-em-up game where the ducks, they waddled across a board and the people, they aimed and fired.”

He thought of the empty space each bullet must have traveled to hit its target; that gap so precious to the Dene expanded in Nazaire’s mind and resolved itself in a dizzy spell of gratitude and excitement.  Nazaire’s blood was still on fire from the ordeal. When was the last time he felt this alive? He couldn’t remember.

“Pelts skinned and divided. Good cut,” one Dene said next to Nazaire.

“How many pelts did you get?” Nazaire asked him.

“Why did the wolves attack?”

Some of the Dene squat together while Nazaire searched out the father of the young boy. He wandered in camp and scanned Dene faces among all the back slaps and handshakes. Nazaire found the man with the boy and approached. “How old is your boy?” he asked.

The Dene turned in surprise and could not stifle a proud smile. “Nine. My heart glad you see him.”

“See him? How could anyone miss him by your legs. Brave boy and wonderful shooter.
I been scared before but not like this. Tell him I said he did excellent good.”

“It game to wolf. We play too, good practice for us,” he said with a slight curl to his mouth.

That night, wolves mourned their dead with laments of grief that broke the runner’s sleep. It broke Nazaire’s heart to heard their howls of love. Back home, who would be teaching his sons to shoot?