But that wasn’t all my motivation

Having two brothers who married two sisters wasn’t in and of itself the motivation for writing my novel, the long shot – there was more to it than that.

I had read two books that impressed me.

The first book was James Michener’s Alaska. This huge tome came out in 2002. I was shocked to realize the power of the Washington senate in our nation’s capital as well as the stronghold held in Seattle and over the entire area of Alaska. All newspapers at the time of the Klondike Gold Rush, 1896, dabbled in generous amounts of sensationalism but none to the extent of Seattle newspapers.

Both Seattle and Edmonton claimed to have routes to the Klondike and each in their own way, lied about it. The Edmonton All Canadian Route was completed in late 1910 but advertised as early as 1897.

Seattle continued to ply any newcomer to its port with the belief that the cold North was loaded with gold. And it is, so that’s one truth. You just have to get it out of the ground, and that’s the truth kept silent, so a deception by omission.

The second book was Antoine Ringuet’s Thirty Acres. Published in 1940, this small book explores a society in transition from agricultural to industrial and along with it, the breakup of the extended family, a strong trait in Quebec.

NEWS OF THE WORLD NEWSREEL

Let me tell you about newsreels.  When I was a kid, going to the movies cost 17 cents. You got to see 2 movies, maybe 2 to 4 cartoons and 1 newsreel delivered in black and white with the sound up so loud, it’s a miracle all the audience didn’t go deaf. Newsreels always started out with a bang from some heavy-duty marching band in full orchestra. The newsreel had 4 or 5 segments, each about 7 to 10 seconds long, usually from some area of the world that nobody had ever heard about.

When I was about eight, I caught a few seconds of a newsreel about Alaskan Eskimos who were practicing their last potlatch – because the U.S. government had just forbade them to ever practice it again.

THEN IT HIT ME

First you freely let people shoot all the buffalo they want out of train windows, systematically decimating the herds by thousands, and driving the remaining north. This eventually drives thousands of wild horses north as well.

Then you systematically decimating the numbers of American Indians in the U.S. by the thousands, and round up the remaining ones, giving them flea-infested blankets and starving them out before herding them onto reservations. This not from one little area of our country but from east coast to west.

Now in the mid-50s, you go to the far reaches of the U.S. in Alaska and insist on mucking with these Eskimos (which I think might have been coastal Tlingits in Ketchikan.)

The newsreel displayed exotic and heinous-looking Thunderbirds and whales on beautifully carved figureheads at the front of longboats, and dignified men dressed in ornately-quilted cloaks, carrying piles of blankets and clothing. They wore unique headdresses of carved animals: wolves, ravens, fish. I didn’t understand what a potlatch was but I sure understood that these people were in their Sunday best and were celebrating some high feast of importance. 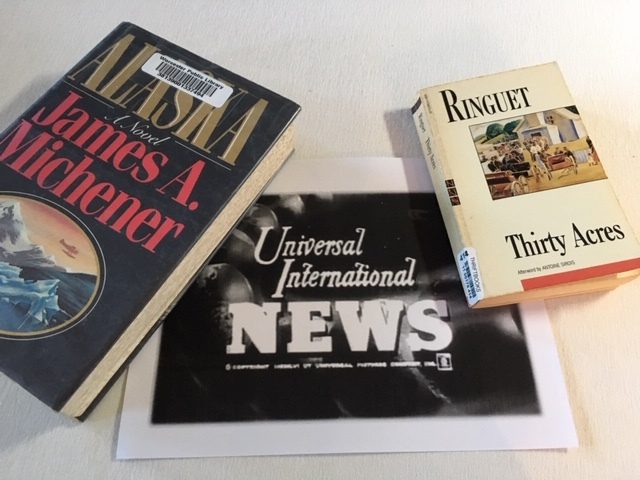 Influencers in motivating me to write the long shot.

A potlatch is a peaceful way of transfering leadership by redistributing wealth among a bonded group of people. To have forbidden these First Nations people from this practice was a down-right violation of Freedom of Religion and against the U.S. Constitution. Back in the mid-50s, no one focused on that. Seeing this newsreel stayed with me for years. I was disillusioned and disgusted with my government.

These were some of the influencing motivations for writing the long shot. And then there was my grandfather who was terrified of ‘Indians.’