Everywhere the ghost town held remnants from gone-by gold mines and quarries. Abandoned bits of scaffolding sat half-built, resembling bones of a skinned whale. One silent roadhouse made up the entire affair.

Its one feature was an old steam warping tugboat used in the lumber boom years that all the men were looking at with severe interest.

“Alligator, they called it, on account it moved in water, then crawled up on land,” one old villager said.

He pointed to the rusted cable lying idle on shore. “The steel cables or ‘warping rope’ wound onto a winch drum thirty inched wide, the first amphibious craft of its kind. The winch would drive onto the main line shaft from its steam engine, a West and Peachy engine.”

Sherman’s men looked at the rusty body with more interest, and circled it for a better look.

“They’re good ‘n’ rotted out now, but down here, the black was once white oak runners on the flat bottom there.”

“I’ll be damned. How big was she,” Nazaire asked.

The old villager scratched a chin and gave it a think. “The hull stretched thirty-two feet long and four feet deep with a beam of ten foot.”

“The alligator would tie up to a log boom on the river there, and hold back hundreds of logs. The head logger moved the boom with that cable, one-mile long it is, tied to some tree on the other side.” 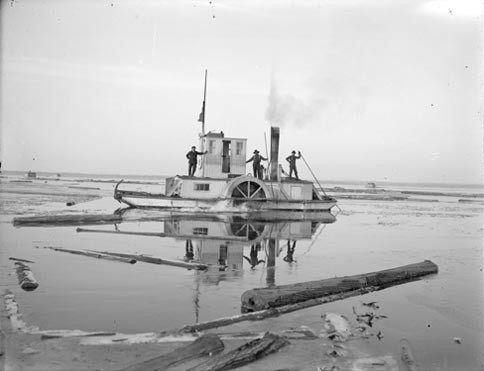 The men found a welcome distraction in inspecting the odd, flat bottom tug. A few miles beyond the village with the banks of Agimak Lake still visible, a sudden whack struck the dank air. Some of the men crouched down, surprised and unmoving.

Steam warping tugs were manufactured by West and Peachy.