Teddy Poulin in the shugar shack

Not everyone can say that their family had a black bear as a pet but this family did for a short time. He was known as Teddy after Roosevelt made cute, fuzzy bears popular. And he had as many adventures as a Hollywood stunt animal. When Teddy first arrived on the 300 acre dairy farm, he was chained by the neck right outside the kitchen door of the large farmhouse. The family had ten children then, all coming in and going out many times a day. First some children ran by the bear on the way to the 4 AM milking. Then back into the farmhouse for breakfast. Then out again for school. The children that were too young for school would again be in and out as the day progressed. The few children who no longer attended school would also come in and out, completing chores on the busy farm. Eventually, there was an evening milking and so those who obliged again, were in and out. Each time, the baby bear would look up, cry for attention, pace back and forth. Many in the family would reach out and touch his ear or back or shoulder, what little shoulder he had. 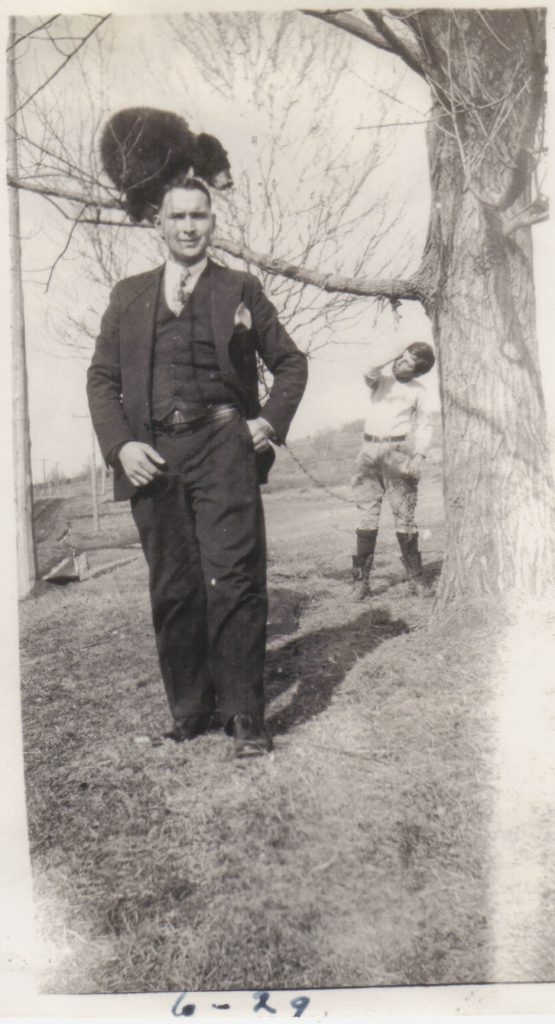 Teddy the Bear during one of his Daring Escapes – 1929.

Teddy and His Circle of Hell
One day, little Cecile went outside. From River Road, she saw her father, Raoul, driving onto the property. She stood, jumping up and down, happy to have her father home. She did not pay attention to the bear, chained right behind her. As she jumped, she slowly approached an area within the grasp of Teddy. He reached out and grabbed her, clinging tight.

With a scream Cecile fought to get free. At the same time, advancing along the very long L-shaped driveway was Papa, in his Model T. Papa was new to driving and right there and then, had to make a decision: get out of the car and run to save his daughter or keep driving and stay helpless inside the vehicle.

With lightening fast speed, Lucia ran from the kitchen. On her way out the door, she grabbed a broom, the only thing handy in her path. With brute force, she flipped the bristle end up, clutching the handle in her arms and with fury, hit the bear on the head over and over. Within a few tense seconds, the bear released Cecile, none the worse for her peril. That afternoon, the children ran around the property, collecting large rocks to create a more distinct circle around which poor Teddy was destined to stay, alone and sometimes maligned by jeers and little taunts.

Teddy and His Great Escapes
Like most black bears, Teddy did not have much of a neck. While sleeping, Harvey would periodically check the big leather belt around his neck for a tight fit or to loosen it if so required. On one occasion, Teddy escaped, roaming free as nature intended. Harvey called for reinforcements and a fury of excitement ensued. Clem, about 13 at the time, ran into the house and retrieved big brother Blaise’s rifle. With the squeals and hollering from the family group (so this would be 2 adults and 10 children in varying ages, all running near the bear, trying to corral the bear), Terry bounded for safety up a tree.

In a dedicated effort to get the bear down before he might climb so high it would be impossible to reach him, Clem climbed an adjacent tree. Clem reached for limb after limb with his rifle in tow, scrambling up the tree. Hem tried to position himself above the bear so as to reach out with the rifle butt and hit the bear on the head, coaxing him down. Little did Clem know that no amount of coaxing Teddy would work. Clem reached out, arms extended, rifle almost fully out of his hands’ grasp. Boom, boom, boom. No amount of hitting Teddy on the head did any good. In full protection mode, the mighty little bundle of fur reached out and in one, felled swoop, claws extended, raked Clem. Poor Teddy was frightened. If this was freedom, perhaps he wanted none of it. In one, swiping motion, Teddy had made good handiwork of his efforts. Clem came down the tree. His vest, shirt, undershirt, heavy work pants, and underwear all cut in 4 long columns. His chest and stomach lined with red stains from the cut skin. Teddy was no wimp to fool around with.

Teddy Useful on the Farm
At one time, the farm had a horse, quite ill. Raoul knew that it needed to be put down. But wait a minute. It’s one thing to put a horse down, another to figure out what to do with a half-ton carcass in your fields. These and other important events and strategic decisions were usually discussed at length at the kitchen table. Someone chirped up with a solution. Why not bring the horse to the eating machine on the farm – Teddy. And so they did. They brought the horse to an area, shot it and then brought Teddy over to clean up the mess. After staking Teddy down with his longer chain and 6-foot metal pipe in the ground, the bear was in high heaven. Raoul returned 2 days later. No trace of the horse was left.

Teddy and Blaise: Natural Enemies
Blaise was the active hunter on the farm. Tall and thin, Blaise would go out hunting for one to three days with his hunting dog. This was no ordinary dog but one which Blaise had spent hours working with. No one in the family would bother the dog. All the family understood that this dog was no pet, but a working part of the farm. True to his nature, the dog let everyone know that there was a bear around. And so a hate-hate relationship grew between Teddy and Blaise. More than once, Blaise would find his dog just outside the reach of Teddy, barking his head off, annoying everyone within ear shot. One day, Blaise prepared to go out hunting. He went outside to get his dog but the canine was nowhere to be found. Blaise called and called. He searched and searched. Eventually, Blaise returned to the farmhouse. He opened the door, his tall frame filling the doorway. Huge tears streamed down his face. Everyone in the room froze. What could have happened that Blaise would be so distraught? In his hand, he held the dog’s tail – all that was left of his faithful companion.