I grew up on Woodland Avenue in Gardner, a residential neighborhood with tree-lined sidewalks. The street was well known because it led to the Henry Haywood Hospital.

All the homes were built about the same time, each two stories. Most encompassed generous back yards, and some even had stone walls in the front.

But the greatest feature of Woodland Avenue was the back of the houses. On one side of the street, the side closest to the Gardner Reservoir, about twenty-two homes fronted a long strip of woods. It was Paradise to the thirty or so children from the Avenue. As kids grew older, one by one they stopped running through those back woods, probably too involved with baseball practices or having orange crushes at the five and dime. Some of us, however, never outgrew the endless paths that crosses and circled the back lots of homes to the edge of the city reservoir.

One Christmas Eve, as my family finished lunch and prepared for the long wait that always accompanied the arrival of Santa Clause, to my surprise, my mom suggested that we all get out of the house and go play, probably so she could finish baking pies with some semblance of quiet and calm.

I was eager to get my long scarf and mittens on, then take them off to pull up my boots, then re-mittened my hands. It was lots of work to get dressed for outdoor play when you’re five years old.

I was very familiar with the SOP that was to come, the Standard Operating Procedures of all the boys who befriended my older brother. They would all yell in my face, one by one, then run away. I couldn’t wait to run after them, as I had countless times.

A good thirty minutes later, I emerged on the shore of the reservoir and not one giggle, nor one laugh was heard. It was very unusual. Never had the boys been so good at keeping quiet and going undetected before. Where could they be? I must have covered the backs of ten homes at least, and not one peep.

The skies darkened. It might be much later in the afternoon than I had realized. I didn’t want to miss seeing Santa Clause’s sled go by. No matter how often my bother and sisters squirmed by the opened front door, I never got close enough to see that once-a-year spectacle in the sky. I missed seeing Santa Clause every year, it seemed.

To my mind, the reindeer were the most important elements to examine. I meant to count them and then I got an idea. Why run all the way home to be pushed and shoved in the doorway, just to miss seeing that magical sight again when I could stay just where I was with an open sky above me and spot them just fine. If they had landing lights on, like airplanes, then all the better for me to finally take in these northern visitors to Garner.

In the back of my mind, I wondered if this ploy might land me in hot water with the folks, but it was worth getting a talking to for my efforts. Well, I waited and waited. The sky was black now. I couldn’t even make out one path. How was I to get back home? In all that blackness, I heard one branch snap, one piece of ice break and hit the surface of the frozen reservoir, and grew scared, more than I had ever been. I felt cold and curled up in a ball, hoping not to be found frozen like a snowball in the morning.

From one side of the woods, the faint beam of a flashlight appeared. Then a voice. It was my dad’s. He’d come for me, and knew just where I’d be. When he uncurled me and pull me into his warm arms, I knew that I was safe. He wouldn’t be giving me any talks about my behavior, whatever that meant.

“Why are you out here?” My father asked.

“I’m waiting to see Santa Clause and his reindeers. If I wait at home, I get squished and pushed so much, I NEVER get to see him,” I complained.

So dad carried me out of the woods and into the garage. We jumped in the car and headed down to the spot where people sold Christmas trees. They had more than trees.

My eyes grew bigger than was possible. I was looking right at Santa Clause and behind him, a small enclosure with two reindeer in it, chewing on carrots and green leaves. We laughed. My dad spent a good ten minutes speaking with Santa Clause while I leaned over the fence and struggled to pet the beautiful, doe-eyed deer.

“Don’t you tell your mother anything when we get home, you hear?” My dad insisted.

My smile was ear to ear. We were partners in crime. It was the best Christmas I remember on Woodland Avenue. 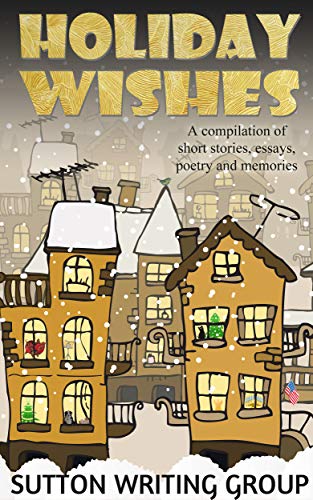 Included in the 2018 Holiday Wishes – A Compilation of Short Stories, Essays, Poetry, and Memories (Sutton Writing Group Compilations Book 3) on Amazon at https://www.amazon.com/dp/B07LFVZNDT/  in both kindle and print.